When it comes to pop culture Madonna can be touted as one of the most popular female artist of the millennium. Nobody can match up to her stature and even after crossing the mark 50 in terms of age her glamor quotient has not gone down a bit. In fact she is still known to be the news maker and also for her music. Here are some little known & interesting facts about the diva Madonna:

She was born on 16th August 1958 in Bay City of Michigan to Silvio Ciccone and Madonna Fortin Ciccone. Her full name is Madonna Louise Veronica Ciccone.

She was paid about $5 million by none other than the giant Pepsi for their commercial but it could not be aired because of over the top religious overtones. It was almost like her video Like A Prayer. The big bosses of the soft drink giant thought it is best to pull it out else it might hurt someone’s sentiment and tarnish their brand.

She is simply not interested in the Walk of Fame in Hollywood. Though she got selected for this honor but as she didn’t showed any interest in having her name carved out in the Hall of Fame you won’t find her name in there. Now it is said that the invitation has expired therefore she will have to resubmit her name for the nomination process but that also seems to be a distant dream as she is simple not interested.

She is related to Gwen Stefani, Mark Wahlberg and Celine Dion. This is found out after an ancestry study that was held recently. In fact she is also related to Lady Gaga who is said to be her successor.

Another interesting fact about Madonna is that she dated many men of different age group and at different point in her life she has been with Tupac, John F. Kennedy, Vanilla Ice, Lenny Kravitz, Dennis Rodman, Antonio Banderas and Jean-Michael Basquiat. She was married to Sean Penn from 1985 to 1989 and to Guy Ritchie from 2000 to 2008. 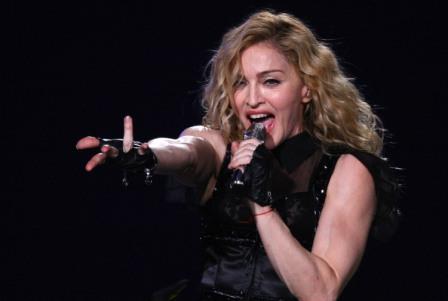 Madonna has been the only female pop-star with large number of hits to her credit. Over 64 million albums were sold in US only with as many as 12 multi-platinum records and she was won 7 Grammys.

When she was in the show Late Night with David Letterman in 1994 she used the F word for almost 13 times. This made the show earn the highest TRPs of all times and not only that it had to be censored so much that it made a record of sort in the history of talk-show.

Another interesting fact about Madonna is that she is considered as the 8th Most Powerful Celebrities in the Forbes list in the year 2005. She is also the Most Successful Female Solo Artist as per Guinness Book of World Records.

Madonna has 22 films to her credit and in 1997 she received the best actress Golden Globe award for her portrayal in Evita.

“Like A Virgin” is the first hit music album of hers which went to find a place in the Definitive 200 Albums of all Time.