Jack Nicholson is an American actor, screenwriter, producer and director. He is a three-time Academy Award winner and 12-time nominee. He is a man who is notable for being one of two actors who have received Oscar nods in every decade from 1960s through the 2000s. Born as a New York boy, Nicholson made his film debut in a B-movie titled The Cry Baby Killer. Here are a few interesting facts about Jack Nicholson that might not know

Jack Nicholson was raised up by his grandmother who he believed to be his real mother. He would have continued to live under this very illusion had a reporter from TIME magazine not broken the news to him during an interview.

Jack Nicholson entered the movie world with “The Cry Baby Killer.” And is best known for the playing the iconic role of Jack Torrance in Stanley Kubrick’s adaptation of Stephen Kings supernatural thriller “The Shining.”

#3: Little appearance worth a million dollar!

Jack Nicholson also made his appearance in the 1960 movie adaptation of “Little Shop of Horrors” and stole the audience’s heart.

Jack Nicholson was very spontaneous and it was his this spontaneity that gave us the famous movie quote  “Here’s Johnny!” from “The Shining.” This line was never included in the script and was made up by him on the spot.

Jack Nicholson crossed the bridge to being a famous personality after the release of the movie “Easy Rider”  and now  is also a producer, screenwriter, and a director. 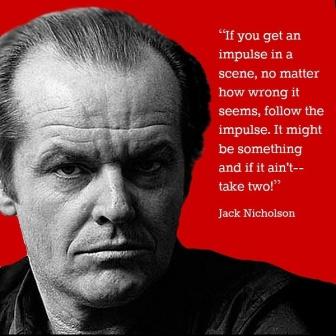 Jack Nicholson not only has a busy professional life but also a busy family life with five children who keep him engaged at all hours of the day.

Jack Nicholson’s trademark look is his dark shaded glasses without which he is rarely seen,  when in public settings. I hope that doesn’t happen in private settings.

Jack Ncholson strived hard by working at MGM as a messenger boy before getting into real action in the field of acting.

Another interesting fact about Jack Nicholson  is that he is a big fan of Los Angeles Lakers fan and refuses to miss a game when they play at home. He rather has his movie roles scheduled nowhere near the game days. Well I will say that lucky players.

Jack Nicholson and actor Danny DeViton grew up together and both their families owned and operated a hair salon together.