Some call him Screen legend, while some call him the superstar, but most of us know him as the man with the most famous blue eyes in movie history. The man I write about is Paul Newman. He was born in 1925 in Cleveland, Ohio, and was the son of a successful sporting goods store owner. He is known to have acted in grade school and high school plays and after being discharged from the navy in the year 1946 enrolled at Kenyon College. After graduation he is known to have spent a year at the Yale Drama School and then headed to New York, where he attended the famed New York Actors Studio. Here are a few facts about Paul Newman, the might not know-

In the year 1995 he was ranked as the 12th sexiest celebrity out of 100 actors in the “100 sexiest Stars” in film history. This ranking was created by Empire Magazine. His piercing blue eyes had become irresistible for the women.

Paul Newman was a true oppose of formality. In an act of protest against “formality,” he even elected to burn his tuxedo during his 75th birthday.

For all the ladies who are determined on becoming thin must go through the salad dressings of Newman. They were so popular that in his fifties, Paul Newman launched a line of food products called “Newman’s Own”.

Acting was not the area that warmly welcomed Newman. Before he began acting, he worked at his family’s sporting goods store

Newman was truly a great inspiration. His image was used as an inspiration by the creator of the “Green Lantern” for his design of the character. 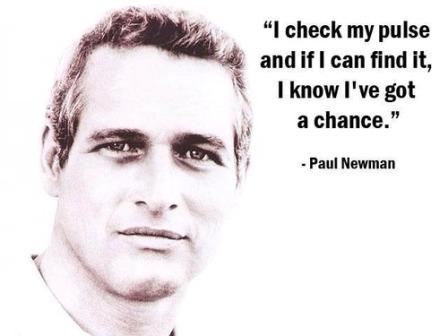 Despite having the personality he did some people mistook him for being Marlon Brando in the early years of his career.  He even once revealed that he had signed nearly 500 autographs as Marlon Brando, I wonder what a punch in the guts that would have been for Marlon Brando.

We recognize many colors but in the year 1986 Paul Newman won the best actor Academy Award for his role in “The Color of Money”, directed by Hollywood heavyweight Martin Scorsese. No wonder it was such a great success.

Another interesting fact about Paul Newman is that he was offered the role of Quint in “Jaws” in the year 1975, which he turned down and was later given to Robert Shaw.

#10: The cancer that took him away

Despite fighting valiantly Paul Newman lost his long battle with lung cancer and passed away in Westport, Connecticut on September 26, 2008.