James Dean was born in the year 1931 and was raised on a farm by his aunt and uncle in Fairmount, Indiana.  It was after grade school, he knew that he was not in the right place and moved to New York to pursue his dream of acting. He received rave reviews for his work as the blackmailing Arab boy in the New York production of Gide’s “The Immoralist”. It was good enough to earn him a trip to Hollywood. His initial film efforts were strictly bit parts but if the beginning is easy then the trip is never worth it. Here are a few facts about James Dean that you may not know-

Dean had set up very high standards for himself and let the public know of it when he once said, “Being a good actor isn’t easy. Being a man is even harder. I want to be both before I’m done.” I wonder how many men are there who think like him.

#2: A little bit of dangerous love

During the filming of Rebel Without a Cause, the director of Dean, Nicholas Ray, had an affair with his costar, Natalie Wood, who was 16 years old at that point and Sal Mineo, a closet homosexual who played the role of John “Plato” Crawford, was hopelessly in love with Dean. I can so totally empathize with him.

Dean’s bicycle had a tragedy filled life as Dean’s favorite pastime as a child was to disassemble and then reassemble his bicycle over and over again. Different people, different choices.

Where other people dream of living a hundred years, Dean often told more than one friend that he did not expect to live past 30. While discussing the risk involved in racing cars, he had said: “What better way to die? It’s fast and clean and you go out in a blaze of glory.”

Dean was known to be suspended from high school for three days after trying to throttle a heckler during one of his readings for an upcoming acting competition. 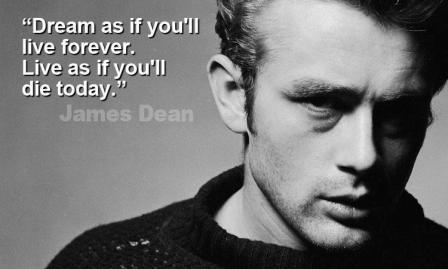 Prior to becoming famous, Dean would sleep in his car if rent was not affordable, and go on dates with gay men to get a free meal. Well no one was to get hurt but I wonder whether he had really begun to enjoy it eventually.

Dean is best known for his movie Rebel without a cause and what a tragedy we can say that he died before its release.

We know that people at times get obsessed with their work but Dean Beat all records when while shooting Giant, he wore the same shirt for two weeks straight without washing it.

Another interesting fact about James Dean is that he was the champion pole vaulter during his high school days. He was the master of the craft at everything he did.

The first Broadway show in which Dean starred was See the Jaguar which was closed after only six days. Had they known what a legend they were closing, probably the show would have gone longer