Illusionist, magician or an artist you can call him by any name you want but the fact remains that his stage-name is sufficient to introduce him to the world. Harry Houdini, mostly known as Houdini was famous for his escape act that he performed in front of his audiences. Here are some little known, amazing & interesting facts about Harry Houdini-

Harry Houdini whose original name was Erik Weisz was born in Budapest, Hungary but due to some fear during the Word War I he started claiming that his birth pace was Appleton, Wisconsin, USA. The actual fact is that Rabbi Mayer Samuel Weisz and Cecilia Steiner, his parents moved to Appleton when he was 4 years old in 1878.

Chinese Water Torture Cell is one of the famous escapes that he is known for. He even had copyright this act so that nobody can use this act to their benefit. In this act he used to tie his feet with chains, hang himself upside down and went into water only to come out of it as a free-bird. This act was performed to precision by this genius in 1912.

#3: Some other feats achieved

Apart from being a magician he was also an actor and producer who have done several silent films. He has a star in walk of fame in Hollywood. He also tried his hands in flying plane and was the first one in Australia to fly a plane.

He was married at the age of 19 and his wife was the stagehand who was there by his side on stage in most of his acts. It is said that whenever the two fought Houdini would go out for a walk and when he returned he always threw his hat and if she threw the hat back then it meant that she was still angry.

Another interesting fact about Harry Houdini that he used to perform free of cost for the troops and one of his popular trick at the event would be Money for Nothing where he used to produce money out of nowhere and this way he gave away more than $7000 for the soldiers out of his pocket. 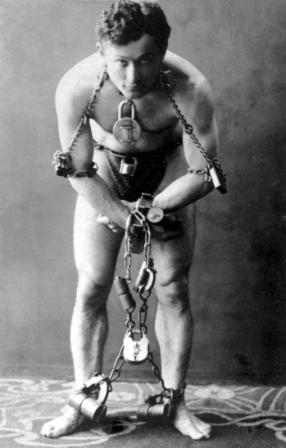 In order to achieve perfection he trained himself in many ways. He could easily untie different knots with his feet, played card tricks even without having a look at them and held his breath for about three minutes.

Witnessing his trick the beer company, Tetley threw him a challenge of escaping from the beer cask but the task proved to be a difficult one and he was later rescued as he was not able to fulfill the challenge.

A pact was made between him and his wife so that she could understand that it was actually he and not anybody else in disguise. On the 10th anniversary when the phrase was not repeated his wife gave up on this.

In order to honor his skills a stamp was released by the Government which had a hidden image which could only be seen through specific lens.

Another interesting fact about Harry Houdini is that once in an act he once escaped from a jail but the newspaper demanded that he did that by bribing the official and that it wasn’t his skill otherwise. Houdini sued the newspaper and won the case.