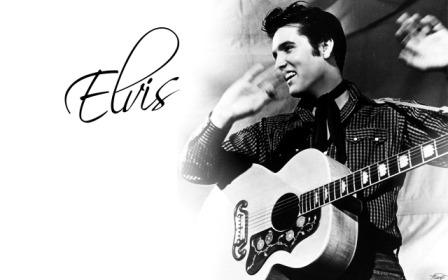 The ‘King’ of million hearts all over the world and rock and roll, Elvis Presley defined an era. He was the MAN of the showbiz industry in his time with the unearthly ability to deliver hit songs after hit songs to the obvious pleasure of his fans. The man who from his humble beginnings from the farmlands of Memphis, Tennessee ended up making the whole world groove to his tunes, whose killer looks made many a women go weak in their knees, a man who made rock and roll what it is today he will always be remembered as the true superstar. Almost everyone knows something about the King but the following facts will seem new to many of his still dedicated fans. Here are some little known and interesting facts about Elvis Presley:

The man whose tunes made people go crazy on the dance floor studied to be an Electrician. Post high school Elvis took up a job at a local electric company as a truck driver and enrolled to become an electrician. Fortunately for us, his music career took off and he left his job for good.

‘The King’ had named his entourage as the Memphis Mafia and had gifted each of the members diamond and gold ring with a thunderbolt and TCB inscribed on it. TCB stood for ‘Take Care of Business’.

Elvis Presley was an identical twin but unfortunately for him and his parents the baby was stillborn.

His manager used to be a small time crook who used to paint sparrows yellow and sell them as canaries before he became the manager of one of the most iconic man to grace the planet. That’s some promotion and good luck to have.

Elvis fans have found many ways of paying tribute to him but none have been as prolific as his impersonation according to a magazine article recently published ‘The King’ has as many as 80,000 impersonators or Elvis Tribute Artists all around the world.

King of Rock and Roll had many dance moves under his belt but few know that he was also a black belt in karate. He took up martial arts while he was fulfilling his military duties in Germany in 1958, his teacher being Shotoken sensei Jurgen Seydel.

The great man was buried twice – yes you read that right, twice. After his first burial at Forest Hill Cemetery in Memphis many youngsters of Memphis tried to rob his grave which resulted in him and his mother being re-interred at Graceland, his home at Memphis, Tennessee in October 1977.

The insides of Elvis’s bedroom at his Memphis, Tennesse home Graceland was accessible to his very immediate family only. A notable exception and the only one to this was Nicolas cage who had the honor to visit his bedroom while he was still married to his daughter Lisa Marie Presley.

Another interesting fact about Elvis Presley that he is part of a great and very distinct family tree; he was the direct descendant of the great-great grandfather of Abraham Lincoln and was a distant cousin of Jimmy Carter.