What would be the best introduction for this man? An actor who worked his way through to become the 40th President of the United States of America or the person who was destined to be the President of the United States. He was known to make things better for his people and that is the reason the inflation rate and marginal tax rate dropped during his tenure. Here are some little known & interesting facts about Ronald Reagan:

He was born on February 6, 1911 in Tampico, Illinois. His full name is Ronald Wilson Reagan and he was born to father John Edward Reagan who was a shoe salesman and Nelle Wilson Reagan.

In 1932 he graduated from Eureka College. He also served his country in the Army from the year 1942 – 1945 where he joined as lieutenant and when he left army he was a Captain.

#3: Only President to be divorced

Another interesting fact about Ronald Reagan is that he is the only President who has been through divorce. His first wife was Jane Wyman whom he married in 1940 and the separated in 1948. Then he met Nancy Davis at the set of Hellcats of the Navy and got married to her where William Holden stood by as the best man.

He is father fondly called him Dutch due to his look and also because he used to have Dutchboy haircut.

Ronald Reagan was known for his ability to bring the numbers down in good sense. During his tenure the Marginal tax rate went down to 28% which was earlier as high as 70%. Then the inflation rate also dropped from 12.5% to 4.4 % during his tenure as a President. During the reelection in 1984 he won 525 electoral votes which is 58.8% of the votes and also was declared winner in 49 states opposite Walter Mondale. 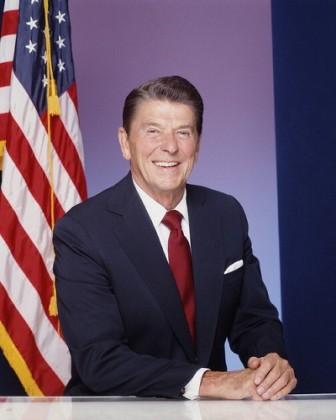 Started his career in mid-west as sports announcer then started his career as an actor and hosted the show General Electric Theater and Death Valley Days. He then went on to become the Governor of California and finally in 1980 was elected as the President of the United States.

Another little known fact about Regan is that during an attempt of assassination he was shot but was lucky to enough to survive that. He was admitted to the hospital soon and after keeping him under observation for almost 10 days he was released.

He was never the original choice for the movie Casablanca but it was mere publicity stunt by Warner Bros. Bergman and Bogart was the official and first choice from the very beginning of the film.

Another little known & interesting fact about Ronald Reagan is that he was nearsightedness and had hearing problem too. He used to wear contact lenses when he was filming and he also used hearing aid as the right ear posed some major problem in hearing.