“In Politics, if you want something said, ask a man; if you want something done, ask a woman” – this is what describes Margaret Thatcher the first woman Prime Minister of Britain. She was strong enough to lead the country and bold enough to say those words. It is said that she might have been one of those who have invented soft ice cream by fluffing in some more air in ice cream which would eventually make the ice cream soft and fluffy. Apart from the taste point of view it is said to curb down production cost too. Let’s checkout some little known & very interesting facts about Margaret Thatcher:

She was given the title of Iron lady by a Soviet Union Journalist known as Yuri Gavrilov in the army newspaper in 1976. This name was given to her because of her toughness that she projected professionally and personally.

She was born on 13th October 1925 in Grantham, Lincolnshire, England. Her real name is Margaret Hilda Roberts. Her father was Alfred Roberts and mother was Beatrice Ethel Roberts.

She started her political career as a Member of the Parliament in 1959 for Finchley and from there she went on to become the Conservative Party leader in 1975 and finally in 1979 she was elected the Prime Minister of the country. She became the first and the only Prime Minister of Britain to win the three terms consecutively. She had hold on to the post for as long as 11 years which is a record in itself which the contemporary British PM was also not able to break.

Another interesting fact about Margaret Thatcher is related to her diet, In her diary an unusual diet was written and that was said to be followed by her so that she can lose 20 lbs all within a fortnight. The diet included grapefruit, black coffee, and two eggs in the breakfast, again two eggs, tomatoes, spinach, coffee and single malt in the lunch and dinner would comprise of lean steak, cucumber, coffee, olives, tomatoes and again single malt.

In order to build up the security for her she was offered 20 female experts in karate but she said she will only accept if the male leaders were given 20 male experts in the karate too. 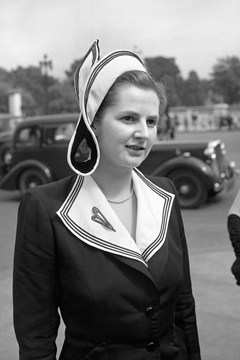 She was the one who stopped providing free milk to the children of the school earning her the name of Milk Snatcher during 1970s.

She did the cooking for her family herself and never hired any chef. She used to cook dinner for her family and sometimes even the cabinet ministers were lucky to get food cooked by her.

There used to be absolutely no problem in decision making or her energy during the day even if she had only 4 hours of sleep during the weekdays.

#9: Her purse the safest place

Another interesting fact about Margaret Thatcher is that she once proclaimed that the safest place that anybody can find in the Downing Street is her purse.

#10: Clothes from Mark and Spencer

Mark and Spencer were confident that the Iron Lady would love their dress therefore they used to send her the clothes that she used to like.