She is America’s sweetheart and is known for various reasons. Be it her infectious smile or her distinctive laugh or her impeccable acting skills, whenever these qualities are mentioned, only woman can be thought of. The woman is none other than the mesmerizing Julia Roberts. Her ability to carry the audience with her role and make them love the movie so much that watching it for even the fifth time seems like the first, is exclusively her very own. With every role she brings out a different self of her. Here are a few little known and interesting facts about Julia Roberts that you wouldn’t have come across before.

#1: We know what we want for the next Christmas

When we are gifted wool by our parents and grandparents wool for Christmas, nothing can be more disappointing than that but if the same wool was to be given by Roberts, how much more special it would become. Considering the fact that Roberts loves to knit, it really is a possibility.

She has history of playing the clarinet and oboe in her school days. As per her she was the only oboist in her class.

She knows it really well that the subject Biology doesn’t contain only bout ways of loving a pet. Her aim to be a vet was off the table as soon as Julia realized the amount of hard work was going to be required to study biology.

All of us admired Sharon Stone’s iconic role in the film Basic Instinct but the thought of our beloved Roberts doing that role can’t be so good. Well I guess she knew what was in the hearts of her fans and declined the role when it was initially offered to her.

Jason Patric, Liam Neeson , Matthew Perry and Benjamin Bratt, the only thing they have in common is that they have been loved by Roberts at some or the other point of time in their lives. However the man who finally she decided to love for the rest of her life is Dylan McDermott. 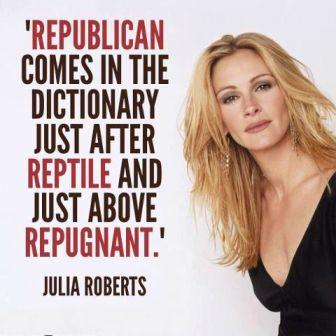 #6: Love for her children

Julia loves her children to such an extent that she has their names tattooed on her lower back. Now this is what you call a painful love.

Behind the million dollar smile of Julia there is her habit of swearing. Well I doubt if there is anything else that can make a woman more attractive.

We are scolded during our childhood days for biting our nails but Julia has had a habit of biting her toe nails. Now that’s what you can say is a little gross.

#9: Money is all in her pocket

In the year 2007 Forbes magazine named Julia as one of the richest women in Hollywood. Now who needs a man?

Another interesting fact about Julia Roberts is that she is a left hander, but for the film Erin Brockovich she learned to use her right hand. I think it was all worth it.