In the current scene most of all see Mr. Narendra Modi as an eligible PM for India for the next electoral. We have seen the good and observed the negative as well and it’s like there is always two sides of coin.

Here are few of negative points of Narendra Modi which may prove a barrier to his success:

It’s been observed that Modi’s personality is such that either people support him wholeheartedly or he out rightly reject him.

In a democracy like India divisive personality is not good for national integration where so many religions have coexisted since time immemorial with more than 20,000 dialects spoken across the length and breadth of the country.

His projected association with the Godhra riots has always brought questions on his credibility.

Mr. Modi is famous for his dictatorial way of functioning. All the years while he has governed Gujarat, Mr. Modi has kept all the major portfolio, ministries to himself and to his close confidants. The decision making process solely executed by him.

Even within his own party, the politicians who opposed to him have been systematically marginalized to an extent that a few have left BJP to float their own political outfits.

In a large democracy like India to get major bills passed consensus is required across the political spectrum. While governing Gujarat Mr. Modi has ruled a government which was in absolute majority. So he doesn’t have that consensus building experience. This is itself is a question mark on the way he can govern keeping all major political parties into confidence. 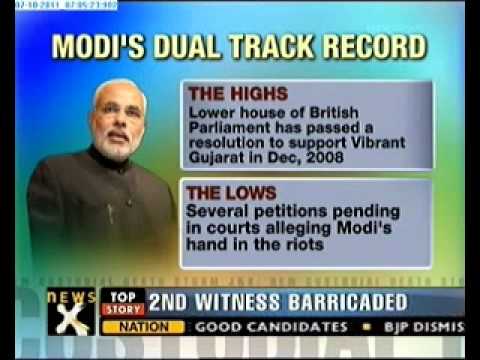 #4: Inexperience in running a Coalition

Since late 80’s the Indian electorate has always thrown up a fractured mandate. No political party has ruled the country on its own. Assuming the trend continues. Mr. Modi, if does comes to power will have to show immense patience, perseverance and calm.

#5: Not open to constructive criticism

Another negative point of Narendra Modi is that he is not open to constructive criticism. While running the government in Gujarat Mr. Modi, at times has given knee jerk reactions to criticism. Often out rightly dismissing the claims of opposing parties without giving any clarifications.

Although undeniably he possesses the oratory skills that charms the India audience, at times he gets carried away and involves in jingoism which can sow seeds of division and hatred among countrymen.

He is known for making tall claims which are sometimes neither economically viable nor practically possible to implement.

For example he gave the idea of installing solar cells along the indo Pak border to check cross border infiltration an d produce solar energy at the same time but this idea is nearly impossible as the cost of construction, installation and maintenance is itself will be huge and will return lesser profits.

Do you know any other negative points about Narendra Modi? Drop your comment below in the comment box