Adjourned with the ‘Father of the nation’ title, we all know Mahatma Gandhi very well. Not only India but the whole world knows him as a leader who followed Truth, Peace and Non-violence. Mohandas Karamchand Gandhi, fondly known as Bapuji, fought the freedom struggle with Ahinsa and Satyagraha which he considered were his greatest weapons. He strived his entire life to serve our nation and mankind at large. Here, We present 10 interesting facts about Mahatma Gandhi –

Mahatma Gandhiji’s childhood aspiration was to study medicine and become doctor one day. But during those days this profession was considered below his caste, so his father convinced him to study law instead.

Though an average student, occasionally Gandhiji used to win awards and scholarship at local schools.   One of the study report card stated him as “good at English, fair in Arithmetic and weak in Geography; conduct very good, bad handwriting.”

As a child, Gandhiji was always afraid of darkness. He would fear that ghost prowling in some dark corner would suddenly jump on him. One day, his old maidservant, Rambha advised him to think of Lord Rama whenever he was afraid or frightened. From that day onwards, Gandhiji believed that as long as Lord Rama was there with him, he need not worry about anything. Even when he was assassinated, the last word he spoke was the name of Lord Rama.

In order to improve his concentration and pronunciation, Mahatma Gandhi decided to memorize complete verses of ‘Bhagwad Gita’ during his imprisonment days.

#5: Travel along with the goat

Gandhiji used to travel along with his own goat, so that he could have fresh milk always. Though he strictly followed vegetarianism, most of the freedom struggle days he would go fasting. 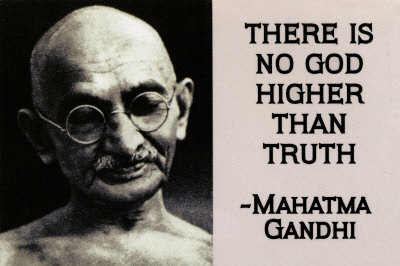 Bapuji had learnt the art of making leather shoes. During his tenure at the Tolstoy farm, he weaved shoes for children out there. He was considered good at his skills.

A group of Chinese visitors gifted Gandhiji three monkeys made of china clay. He truly cherished and preserved the gift for life.

Another interesting fact about Mahatma Gandhi was his love for walking! At the age of 60, Mahatma Gandhi walked 241 miles during the Salt March from his Ashram to Dandi Sea.  He attributed this habit to his initial student days, when he used to enjoy long walks.

More than 150 countries in the world have illustrated the life of Mahatma Gandhi in stamps.