Dwight David Eisenhower went on to become the 34th President of the United States. Though he was bought up in a poor family but his parents make it a point that they provide him with good education and once he was in his youth he started earning so that he can support himself and family. He went on to join the military so that he can get free education in college. He attended West Point from 1911 to 1915 and was commissioned second lieutenant. Here are some other little known & interesting facts about Dwight D. Eisenhower:

He was born in Denison, Texas on 14th October, 1890 but he moved to Abilene, Kansas during his infant. His father was David Jacob Eisenhower a mechanic by profession and mother was Ida Elizabeth Stover. He was married to Marie ‘Mamie’ Geneva Doud and had two children John and Doud but at the age of 3 Doud died.

When he was a teenager he injured his leg seriously and by the time he reached the doctor the infection was so bad that amputation was suggested. Though he was made to repeat one year in the high School his leg did get completely healed.

Another little known & interesting fact about Dwight D. Eisenhower is that he had served his country in both the World War. During World War I he was serving as a trainer and the commander of training center. During World War II he was promoted to 5-star Supreme Commander making him the most powerful and influential military person of the world. In 1944 he oversaw D-Day Invasion too.

Dwight D. Eisenhower was actually a German descendant and was part of a big family so the brothers were nicknamed as Little lke, Big lke and so on. The name lke came as a short form of their last name and during the Presidential campaign his nickname was use as a slogan which said I Like lke.

He served the country as a President for 8 long years and was chosen as the 34th President of United States when his age was 62 years. 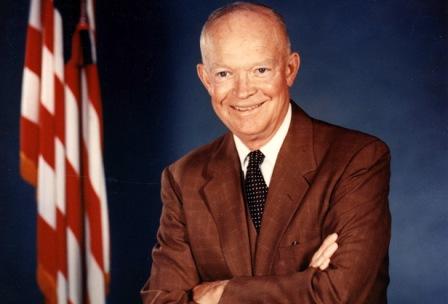 During the closing stages of Korean War he played a huge role and it finally ended in 1953. This is the year he was elected as the 34th President of the United States.

It was around 1957 when 9 of the African American students were restricted from entering the Little Rock School premises by the then Governor itself. He was vocal about this racial discrimination and intervened in the matter which is considered to be one of the biggest steps in movement of Civil Rights for the African American.

He retired as the oldest President of the United States and not only that he had also suffered from severe heart attacks and at the age of 78 years he died on March 28, 1969.

When he was the President Alaska and Hawaii became the states of America making Dwight D. Eisenhower the first President of entire 50 states.

Another interesting fact about Dwight D. Eisenhower is that he was the first President to have pilot’s license and he was also known for his love for golf.