Paul was born in the Roman city Tarsus, located in today’s Turkey. He was born in a wealthy family and he also participated in stoning Stephen, the first Christian Martyr. Paul, a Pharisee and a tentmaker, was not physically impressive nor was he a good speaker. There are some interesting facts about St. Paul (The Apostle) which are unknown to many people, here they are:

7 relatives of Paul is mentioned in the New Testament. They are Andronicus and Junia, Jason, Sosipater and Lucius. There was also mention of his sister and his nephew who helped him in prison.

Paul was the most popular apostle in the early Church as he was effective in forming the Christian Community. He was educated in Jerusalem under the famous Jewish teacher named Gamaliel.

His original name was Saul but after his conversion to Christianity he changed his name to Paul which means small.

He never met Jesus during his brief years of ministry and he was also not one of the 12 apostles but according to the New Testament he did interacted with many of the original disciples, especially in Jerusalem. He was a Jewish by birth and there were questions about his commitment to Judaism both before and after his conversion to Christianity. Jewish plotted to kill him but Paul came to know of their plan. They watched the gates day and night to kill him so the disciples took him by the night and let him through the wall in a large basket. 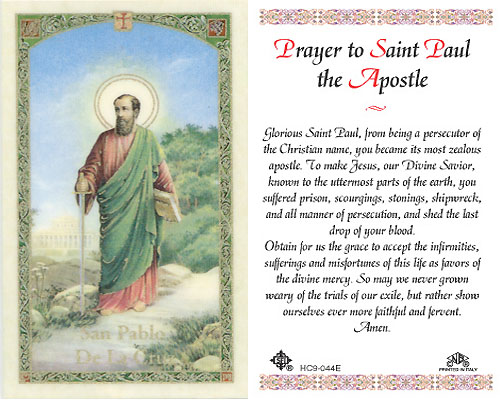 Saul had gone through a conversion experience. On his way to Damascus he saw a bright light and hard Jesus asking him that why he is persecuting him. Hearing this he fell off his horse ad was blind for three days. Only after the visit of a Christian disciple did he recovered his eyesight and from then on he started preaching Jesus’ gospel.

Another very interesting fact about St. Paul the Apostle is related to a incidence when he was traveling to Rome and his boat was shipwrecked on the island of Malta. Paul survived the wreck but was bitten by poisonous snake while setting up a camp. Everyone thought he would die but he was saved by The Lord.

One is justification by faith, the concepts that humans are saved from sin by believing in Jesus. Paul created a theological framework for understanding that Jesus’ death and resurrection triggered a fundamental change in humanity’s relationship with God – the central element of the relationship is faith and not behavior

#9: Different from other disciples

When Paul started preaching, the followers of Jesus who were Jews believed that Jesus was a Messiah to his chosen people but Paul made a radical departure of preaching to non-Jews or Gentiles saying that through Jesus God has extended salvation to Gentiles.

Through his letters we have one of the earliest information about Jesus. All his letters were written before the Gospel was penned.

He is depicted with a sword and a book which symbolizes the manner of his death (beheading by sword) and his writings which became the sword of the spirit.