If you are a music lover then you might not need any introduction of Paul McCartney but for those who are not aware of this name which is very few he was a member of The Beatles. He charted out some memorable songs even when he was not part of The Beatles anymore. He provided music for all ages and the young kid on the block will also love his music as it crosses all barriers. Here are some little known & interesting facts about Paul McCartney:

Everybody might be thinking that he obviously played guitar right from the beginning but that was not the case. He was gifted a trumpet and that became his first musical instrument though he soon bought himself a guitar which he was not able to play. He was left handed so he had to customize the guitar and from thereon he started his journey on the path of music.

His first solo performance with The Beatles was not that good as his voice cracked. He was too nervous to give the performance and that left his band mate amused.

He was born in Liverpool, England on 18th June 1942 to Father James and Mother Mary. He also had a brother Peter Michael who was younger to him. Though Paul was the quiet one but his younger brother was the one who would argue a lot.

Another interesting fact about Paul McCartney is that he was too possessive about his girlfriend Jane Asher and that led to confrontation quite a bit. Jane was the person behind his interest in theater and also art exhibit.

After he broke up from the band The Beatles, he started his own band which is known as Wings. He is said to have named his band wings after NHL Detroit Red Wings, American Hockey Team which is said to be his favorite too. 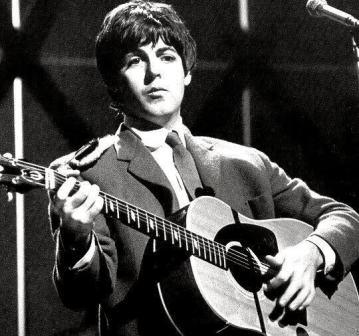 He had an amazing quality of counting backwards from 2000 to 1. He does that real quick and he is better in this from anybody else. The funny thing is that he himself cannot count so fast in the forward sequence of 1 to 2000.

When Beatles became popular he carried cricket in his pocket as his lucky charm. He used to cal it Buddy Holly and never forgot to slip it in his shirt pocket whenever going for concerts. He was also fond of pets and had named his first pet dog Hitler. ?It wasn’t named after Adolf Hitler but actually after his geography teacher in school whose name was Hitler Wickingwood.

He is said to have witnessed the plane crash into twin towers in the 9/11 attack. He even wrote the song Freedom in response to the September 11 attacks.

Very few knows that he is an accomplished painter too. He has also held exhibitions of his paintings at Walker Art Gallery in Liverpool.

Another interesting fact about Paul McCartney that you might not be knowing is that he is an honorary detective with NYPD after he performed free of cost for a charity after the 9 /11 attacks.