The greatest Broadway stage dancer, the choreographer, the singer, the musician, the actor and last but not the least the American film artist Federick Austerlitz, who was popularly known as “Fred Astaire”.  Here are a few little known and very interesting facts about him that you won’t have come across before.

Behind every successful man there is a woman, same was the case for Fred in his case it was his mother. She forced him to perform “brother and sister act” in the town Vaudeville (US) and got applauded for the performance.

Fred performed his act called Juvenile Artists Presenting an Electric Musical Toe-Dancing Novelty when he was only 6 year old in the year 1905.Next day the headline called him greatest child in Vaudeville. Fred and his sister performed all over United States and increased their popularity.

Somewhere in 1910 his mother decided to put a stop to their performances because of child labor laws. He resumed his career with more knowledge in ballroom dance, Waltz and tap dancing in their routine. Fred eyes were always searching for something more, he had taken up the musician responsibility for his act at a tender age of fourteen.

He hit on the stage of Broadway and London in the year 1971and by the end of 1930 he had made himself quite famous as tap dancer.

In 1931 Fred went to Hollywood for screen test and he was rejected saying “Can’t act, Can’t sing. Balding. Can dance a little.” His disbanding with his partner (sister) was very stressful for him, but he turned his entire attention towards romantic dance pattern ad performed in a show called “day and night” Later a movie called “The Gay Divorce” was made on it. Fred with the help of RKO radio picture had managed to make remarkable place in Hollywood and tastes success one after the other. 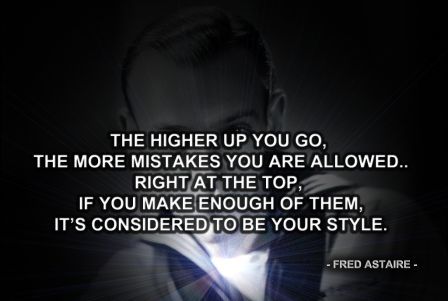 Fred had a straight policy with film-making, either “the camera will dance or I will”. He used to shoot the entire song only in one shot.

His first lady interest was Ginger Roger but did not last for long. They got together for the last time in the movie called The Barkley of Broadway a ‘Technicolor movie’. He married to Phyllis Potter in 1933; she died of lungs cancer later. In 1957, even after announcing his retirement with thirty musical moves in twenty-five years Fred switched to television.

He was master at his work. In his song “You’re All the World to Me” he even danced on the wall and ceiling with the help of his flawless techniques.

Another very interesting fact about Fred Astaire is that he had received numerous awards in his incredible journey of music and dance. The few awards he had received are Lifetime Achievement in Motion Pictures (1960), Hall of Fame (1968), Best Actor in Drama or Comedy Special (1978), the Life Achievement(1981) the last award he received was ‘Life and work honored’ (2008). He was even voted as the greatest movie star of all time by Entertainment Weekly magazine. Fred’s legs were insured for one million dollars.

Fred Astaire’s journey ended when he was 88 due to pneumonia on 22nd June 1987 leaving behind his teaching and aspirations.