When people start searching your name on Google and not on Facebook, you should know that you are famous. Well similar is the scenario with the man who founded the Microsoft windows which all the computers have within themselves. Bill gates and his story of success is an inspiration for many young and his way of living makes many burn with jealousy. His riches are always given as an example. Here are ten very interesting facts about Bill Gates you might not know

Probably it’s a trend amongst all the great men to change their names at a particular time. I wonder whether the fact that I have so many pet names going to result in making me legend one day. The man we know as Bill Gates is actually William Henry Gates III.

Before bill gates began writing great programs, the first one he ever is known to have written was a tic-tac-toe program where the computer was to be your opponent. I wonder who did most of the winning.

Bill Gates often bragged to his school teachers that he was definitely going to be a millionaire by the time he turned 30, who only laughed at him and passed him of as a child, however, not only did he keep his word but he was a billionaire by 31.

Kids are the ones who often know the soft side of their parents, so do the kids of Bill Gates who often tease him with the song billionaire.

Paul Allen and bill gates together found Microsoft at the age of 20, when they had not even graduated from college. 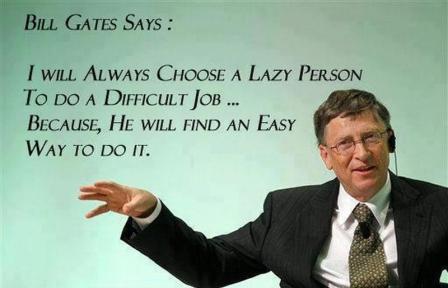 Despite the good friendship between Bill Gates and Mark Zuckerberg, bill gates is not very active on Facebook as when he joined Facebook, the friend requests got a little out of hand.

Bill Gates wealth is capable of giving a tough competition to the complete wealth of a country. If considered as a country, he would be the 37th richest country on earth. He is known to have been at one position on the Forbes list from 1995 to 2009 . in the year 2008 he went to position no. 3.

Everyone knows of the amount of debt US is in, but I doubt whether you knew that Bill Gates earns nearly 250 US Dollars every second and is capable of paying the complete debt of US in a span of 10 years.

#9: Helping in his Manner

Another interesting fact about Bill Gates is that he loves to travel and is known to often visit India for the upliftment of the unprivileged.

If Microsoft windows users claim 1 USD for every time their windows computer hangs, Bill Gates will get bankrupt in just 3 days.