Vladimir Putin, the current President of Russia has a very remarkable journey that started as an officer in KGB (Committee for State Security) raised to Lieutenant Colonel, then as an acting President on the unexpected retirement of then president Boris Yeltsin, followed by Prime minister position and now the current President who is enjoying his third term. Here are a few little known and very interesting facts about Vladimir Putin that you wouldn’t have come across as for now.

His early life had a very humble beginning but no one could deny the fact that his current position involves sheer hard work and courage to withstand all the challenges and opposition that came on his way.

Being a son of an atheist father and a devoted orthodox mother, Putin believes in God but restricts himself from discussing it in public, citing the position he held as reason. His approach to religious policy has been characterized as one of support for religious freedoms, but also the attempt to unify different religions under the authority of the state.

His marital life saw some turbulence often. There was some alleged link up rumors about him with various ladies. Though he kept both his daughters away from public and media there were constant speculations about his relationship with his wife Lyudmila Putina. Speculations rose to such a level that when Lyudmila was not present with Putin in his public appearances, some analysts thought that Putina’s total absence would negatively affect Putin’s image.

Putina’s absence points to just how isolated the powerful Russian leader has become, pushing aside not just advisers but also relatives who could speak truth to power. Some also stated that “The president must be a family man. If you have no family, how can you be a father for the nation? The president of Russia must be a model of morality!” But in spite of all this issues Putin managed to win the Presidential election again. He also put an end to all the speculations by announcing his divorce to his wife on 2013.

Putin was known for his tough stands on Syrian matter or on whistle blower Edward Snowden matter. Putin’s response to Hillary Clinton’s claim that Putin has no soul was – “At the very least, a state leader should have a head’. 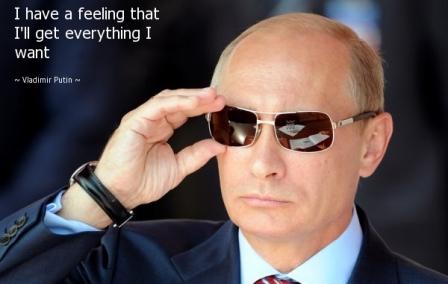 He recommended that international relations be built without emotion and instead on the basis of the fundamental interests of the states involved.

His opposition and some contemporary politicians called him “Undemocratic” but he did not shy away from making strong comments. When advised by US that Russia should have Peace talks his response was, “Why don’t you meet Osama bin Laden, invite him to Brussels or to the White House and engage him in talks, ask him what he wants and give it to him so he leaves you in peace?. Russia doesn’t negotiate with terrorists. It destroys them”.

He faced all sort of comments both in Public and personal front but one fact is etched in history and that need no changes is that Russia has seen tremendous changes in all departments since Putin has taken charge.

Russian economy saw a considerable growth, increase in employment, emerged as an energy superpower nation with reformed energy policy, rise in foreign investments and so on. Though some accuses of him for deliberately cultivating the macho, super hero image by some completely staged actions, he is truly considered as a “he – man” and is a pop cultural icon with many of his controversial courage quotes and using of motivating “Great Patriotic War” slogan “The Victory Shall Be Ours!”.

His martial art skills and all his frequent adventures with wild life and a huge photograph of a bare-chested Putin vacationing in the Siberian Mountains under the headline: “Be Like Putin.” add more strength to his super hero image.

Putin strong statements like Russians have not selected him to please Obama (or any other country for that matter) but to serve the nation which showcases his powerful confident personal aura shows that Putin does not tops the Forbes list of most powerful man for no reasons.