Rahul Gandhi was born on 19th June 1970, the great grandson of our first Prime Minister of independent India Pandit Jawaharlal Nehru, grandson of first woman Prime Minister Smt. Indira Gandhi and son of Mr. Rajeev Gandhi who was the youngest Indian Prime Minister. He has a great lineage and so there is a huge responsibility resting on his shoulder to take that forward efficiently.

So here are some unknown & interesting facts about Rahul Gandhi who is considered to be the youth icon.

He is the fifth generation politician from the esteemed Nehru – Gandhi family. He has a younger sister Priyanka Gandhi who has been campaigning for her brother without holding any official rank in the party politics. His mother Mrs. Sonia Gandhi is the President of the Indian National Congress Party.

He has done his schooling from St. Columba’s school in New Delhi and The Doon School in Dehradun. He did major portion of his schooling from his home due to the security reasons. In 1989 he joined St. Stephen’s College, New Delhi to get his bachelor’s degree in History but afterwards moved to Harvard University to complete his education. After his father’s assassination he returned to India and joined Rollin’s college. He also has a M.Phil degree from Trinity College

After graduating like any other person of his age he also started his career with a management consulting firm, the Monitor Group in London. In India he was one of the Directors of technology outsourcing firm which is based in Mumbai namely Backops Services Private Ltd.

At present he serves as a Member of Parliament from his father’s former constituency, Amethi which is in Uttar Pradesh. He is also the General Secretary of the Indian National Congress and also is a responsible leader of the Indian Youth Congress and National Students Union of India. He is recently elected in the position of congress Vice – President to involve him more in the party politics and national government.

He is considered to be the most outspoken politician and sometimes that gets him into problems. He once remarked that India is threatened more by the Hindu extremists more than Muslim militants and his remark was highly criticized. After the Mumbai blast he commented that it becomes almost impossible to stop each and every terrorist attacks but the terrorist attack should be dealt at the grass root level and once that is achieved it will be more helpful. 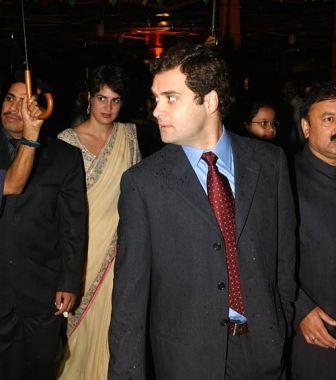 He is very secretive about his personal life and he prefers to keep that under wraps. He has been successful in keeping his personal life out of the media glare but in a press conference he admitted of having a girlfriend, Veronique Cartelli who is a Spanish architect and who stays at Venezuela.

According to him that Lokpal bill must be made accountable to the Parliament like the Election Commission of India. He also remarked that Lokpal alone won’t be of any help in eradicating the corruption which is so deep rooted in the society.

On 11th  May 2011, he was arrested by UP police on his way  to met the agitated farmers in Bhatta Parsaul village but released after 3 hours and was asked to leave for Delhi.

He is the face of new age politics and is famous for practicing new ideas in the political scenario earning him accolades and criticism both. He is praised for taking time out from his busy schedule and visiting common people’s house and spending time with them to understand their problem. He was also criticized for this act as many thought it is a publicity stunt.

His office is in his blackberry and he is always active, trying to build a new age political environment where he is trying to create a whole new Congress with new and fresh blood.

Do you know any other interesting facts about Rahul Gandhi? Drop your comment below in the comment box