It was one other than the classical period that had names which would take a lifetime to be learnt but not few, rather many of the names were worth learning. One such name is Mozart Wolfgang Amadeus Mozart who studied the works of Handel, Bach and Haydn. He is considered as one of the greatest composers of his period. Here are a few interesting facts about Mozart that you might not know

By the age of 6 we can nothing more than learn all the alphabets but Mozart was writing his own compositions by then.

As a 14 year old boy Mozart wrote his first opera, known as Mitridate Re di Ponto, in the year 1770. He even composed his first great mass at the age of 12. It was time that the world knew what a great man had been born on the earth’s surface.

During his visit to the Vatican, Mozart heard Miserere being performed in the Sistine Chapel and from just that much he was able to write out the entire score from his memory. Before then  the music had not been played outside the Vatican.

#4: Praised by the Inspiration

Haydn was one of Mozart’s teachers who were always full of praise for the young Mozart. He was always telling his father there was no other man like him to have walked the earth.

However not much is known about his social group other than his popularity amongst women, he joined the Freemasons in the 1784 which was an organization dedicated to mutual friendship. 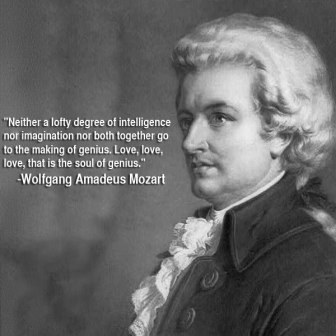 In the month of April 1787, Beethoven who was then aged 16 came all the way to Vienna to get two weeks worth of musical lessons from Mozart, who worked his magic so well in those two weeks that Beethoven’s music today is considered as one of the greatest.

At the age of 17 when the most prestigious thing we can get is our graduation degree, Mozart received a prestigious appointment to play in the court of Vienna in Austria. Well probably this is the difference between boys of that age and boys of our age.

Having a large number of children seemed to be a trend during the classical period, but the survival of those children through infancy was a miracle in itself.  When Mozart married Constanze Weber in the year 1782, they had six children, however only two survived infancy.

Mozart like the generation of today earned a substantial sum from his successful operas but was an extravagant man when it came to spending and often ended up in financial difficulties.

Another interesting fact about Mozart is that the number of legends that were being born in that period was so common that when Mozart died of kidney failure, he was buried in a common grave with little fanfare.