We have often seen the man who always put his hand in the pocket of his suit jacket. But when we look at him, it is only with admiration, John  F. Kennedy, named after his maternal grandmother was very ill as a child and was given the last rites five times, the first one being when he was a new-born. Here are a few facts about John  F. Kennedy that you may not be aware of-

John F. Kennedy, also known as “Jack”, was sent to The Choate School in Connecticut for his 9th through 12th standard grades where he, along with his brother Joe Jr. and friend Kirk LeMoyne Billings, exploded a toilet seat with a powerful firecracker. As a result, when the headmaster of the school, George St. John, spoke about this in the chapel assembly saying that some “muckers spit in the sea”, Jack named his group as “The Muckers Club”.

In 1943, when he was serving as a lieutenant in the U.S. Navy, commanding a patrol torpedo boat, his boat along with two others was attacked by The Japanese destroyer Amagiri. Kennedy, who was suffering from lower back problems, saved a badly burned crewman. For this heroic act, he received Navy and Marine Corps Medal.

He published his first book, Profiles in Courage, in  1956, which received Pulitzer Prize(an award given for achievements in newspaper and online journalism, literature and musical composition) for Biography in 1957. He is the only president till date who won this prize.

Kennedy was the 35th president of United States and was the first person born in the 20th century, to become a president.

#5: The hope from the elder sibling 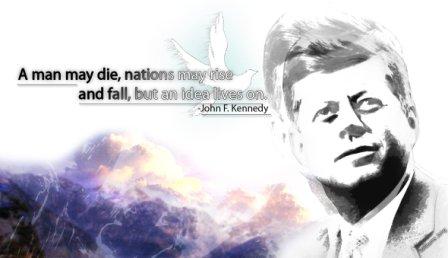 He met his wife, Jacqueline Lee Bouvier, also known as Jackie, at a dinner party.

#7: The Only Surviving Child

Jackie had a miscarriage in 1955 and they had four children out of which, Arabella Kennedy, whom Jack and Jackie intended to name so, was a stillborn daughter born on August 23, 1956 and Patrick Bouvier Kennedy was born five and a half weeks early on August 7, 1963, however, he died two days later. Only two survived. Caroline Bouvier Kennedy, born on November 27, 1957 and is the only living child of Kennedy till date. John Fitzgerald Kennedy Jr. was born on November 25, 1960 and died in a plane crash on July 16, 1999.

On November 22, 1963, Kennedy was shot in the throat, in the upper back and in the head which led to his death.

#9: The most visited grave

Another interesting fact about John F. Kennedy is that his body was buried in 20 by 30 ft. small plot, in Arlington National Cemetery on November 22, 1963 and it’s interesting to know that over a period of three years time, that is, from 1964-66, around 16 million people visited his grave.

Kennedy’s wife, Jackie, gifted him a ring on his 44th birthday which had his arms engraved on it. The arms were included in the seal of the USS John F Kennedy. After his assassination, the Canadian government named a mountain after him as Mount Kennedy, on which, his brother, Robert Kennedy, climbed in 1965 and planted a banner of the arms at the summit.