Pablo Picasso was the most dominant artist of the 20th Century. He was not only an extraordinary painter but also a ceramist, sculptor, print maker, stage designer and a poet too. He was an abundant artist; the artworks he has produced are estimated to fifty thousand including one thousand eight hundred and eighty five paintings, one thousand two hundred and twenty eight sculptures, two thousand eight hundred and eighty ceramics and more or less twelve thousand drawings. Here are some less known & interesting facts about Pablo Picasso that you might not be knowing-

He was born on 25 October 1881 in Malaga, Spain. At the time of his baptism Pablo Picasso had twenty three middle names which were a series of saints and priest Pablo Diego José Francisco de Paula Juan Nepomuceno María de los Remedios Crispiniano de la Santísima Trinidad his last name “Picasso” comes from his maternal side of the family.

According to his mother, Picasso was born to be an artist as his first word was “piz” which is short for lapis which means pencil in Spanish.

At the age of thirteen he had his first exhibition.

#4: Not up to the Nazi standard

During the German invasion of Paris Picasso was not allowed to display his art publicly because it was not according to the Nazi’s standard.

He has excelled from the other artist of his era in terms of techniques and accomplishments. He was the inventor of the constructed sculpture and the co-founder of the collage. 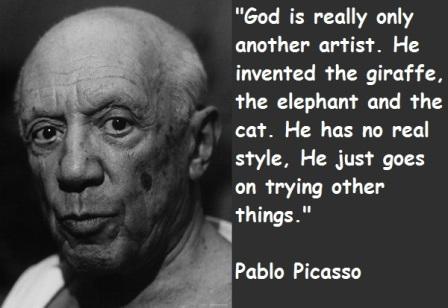 Not only was he far more advanced than the artist of his era in art, he was also the leader in fashion as well. His Breton striped t-shirt was designed by Coco Chanel. Rumor has it that he stole the Mona Lisa in 1911. Supposedly, Picasso’s friend Guillaume Apollinaire paid someone to steal the Mona Lisa. Picasso was interrogated but then was later released. He made a sculpture in Chicago and donated it to the city of Chicago.

Another interesting fact about Pablo Picasso is that he had several affairs in his life. An interesting fact is that Steve Wynn, owner of “dream” painted by Picasso accidentally poked a whole while showing his friends a sketch of Picasso’s mistress.

In 1900 he faced financial problems and had to burn his paintings to get warmth. Later in his life he used to pay his bills with a simple signature having only one word. On 8th April 1973 Picasso died in Mougins in France. He is buried in his chateau of Vauvenargues .

His final words were: “Drink to me, drink to my health, you know I can’t drink anymore “