It doesn’t matter in which part of the world you are, the name of Mr. Neil Armstrong doesn’t need introduction. He was the first human to set foot and walk on the moon, way back in 1969 and this had made him a household name, and till death which is preserved. Here are some interesting facts about Neil Armstrong, which most of the people may not be aware of:

The American astronaut, Neil Armstrong, full name Neil Alden Armstrong was born on the 5th of August 1930, in Ohio. He had piloted jets, helicopters before he entered the space program, and worked for the U.S. Air Force and Navy. The Purdue University awarded him his Bachelor of Science degree in aeronautical engineering and there on he went on to do his Master of Science degree, with aerospace engineering from the University of Southern California. He also has a number of awards and honorary doctorates to him by several universities.

The legend died at the age of 82 on August 25, 2012 owing to blocked coronary arteries, few weeks after undergoing a heart bypass operation.

#2: The Starting Point of Journey

When he was just two years old the passion for flying has started when his father took him to National Air Races (NAR) in Cleveland, Ohio and then Neil has never looked back. At the age of six he had is first airplane ride, in Ohio.

When he was 15 he started taking training in flying at an airport located nearby Wapakoneta in an Aeronca Champion airplane. Paying fees of this training was not an easy task for him; he started doing work at so many jobs at airport and also in town.

A guy who has not completed his graduation, celebrating his 16th birthday and yes he became the licensed pilot. Even though he never had any automobile driving license before this but he was a pilot now.

#4: The first war and medal

The Korean War has started in 1950, at that time Neil was in the middle of his studies but still he served the nation. He flew 78 combat missions. During war his plane was shot once and later 3 Air Medals were awarded to him.

Gemini 8 spacecraft was the first mission for Neil Armstrong went into space which has started on 16th of March 1966; he was the command pilot for the spacecraft. Later for this mission astronauts had to make an emergency landing over the Pacific Ocean. 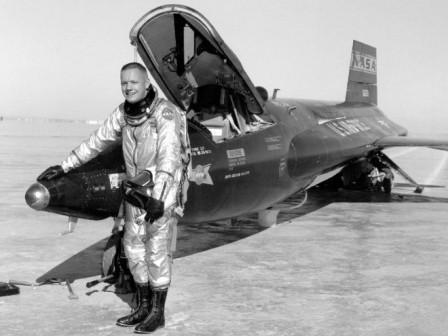 The second and most remembered journey for Neil was moon landing ofThe Apollo 11 in 1969. He was the commander of this mission but It was his last space mission too. During his two and a half hours over the surface of moon, He has collected so many samples; he has conducted experiments and took lot of photographs.

Another interesting fact about Neil Armstrong is that he retired from NASA in 1971 and after leaving the organization he has started his career as a professor in University of Cincinnati and taught aerospace engineering for 8 years.

Although he is amongst well known and popular persons in the world but he always wanted to be out of the limelight. After so many years finally he decided to come out and gave permission to write his biography, named ‘First Man – The Life of Neil Armstrong’, and the author was James Hansen.

Mr. Neil Armstrong has married twice and from the first marriage he got two sons and one daughter but unfortunately the girl baby died at the age of three.

Sharing his experience of Apollo 11 flight, Neil once said that: “I hope someday somebody will go to the moon and he/she will clean all the footprints which I have made there.” This is an inspiration for many.