The real name of Dr. Seuss is Theodor Seuss Geisel but he is famous for using several pen names including LeSieg, Theophrastus Seuss, Rossetta Stone and Dr. Seuss. With these several pen names he started his career and became famous as a children author. The rhymes in his work are simple to read and ring a harmony in your ear. The children soon became fan of his writing and there would be very few in the world who has not read his book. Here are some little known, amazing & very interesting facts about Dr. Seuss:

He was not a doctor but when he started writing for a humor magazine professionally then he added Dr. to his name so that it sounds good. In New York he was working in a feature which was called the Bolds and the Beasties.

Dr. Seuss was the winner of various awards including Academy Awards which he has won twice and even the Emmy Awards has been accredited to him twice. Then the prestigious Pulitzer Prize, Peabody Award and Laura Ingalls Wilder Award.

One of his famous creation which he wrote because he thought that Dick and Jane is not that interesting and it must be replaced so he came up with this book which ultimately made the Dick and Jane book go out of the library to adjust Dr. Seuss book.

Green Eggs and Ham was a book that was the result of a challenge that Dr. Seuss accepted. He was challenged to complete a book using 50 different types of words and he did that. The topics included some basic problems of the children amongst which the major one was about the fussy eater and many others.

He worked on imagination and brought out characters like Grinch, Sneethches and Lorax who became quite popular. The creator also had interesting character himself. 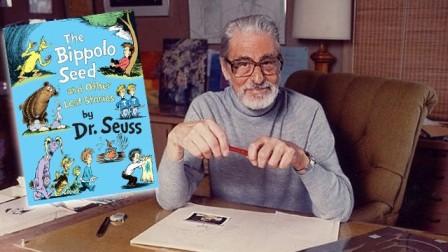 Another very interesting fact about Dr. Seuss’s life that is very less known to people is that he joined as Captain in the army in 1943 and served as Commander in the department of animation. He then went on to draw as many as 400 cartoons which were based on politics for the daily named the New York City and that is not all it was considered to be the leftist daily.

He owned more than hundreds hats which he would only show off in his dinner parties. He used to keep them stored in his secret closet so that nobody gets access to his collection.

#9: Praise for other children writer

Maurice Sendak was his favorite children author and once he said that if he were a kid then he would definitely be reading the works of Sendak. He liked the way he wrote books for children without losing out on the adult’s perspective.

#10: Out of the box compensation

Another interesting fact about Dr. Seuss is that when he was working with the humor magazine he received hundreds of shaving cream and nail clippers as compensation instead of regular salary.