Jacqueline Kennedy Onassis, one of the most glamorous women of 20th century, was an exceptional and unique American icon. She not only was the wife of the 35th President of the United States, John F.Kennedy  and the former First Lady but she was someone who changed the world’s perception of grace, class and elegance. With her great sense of beauty, her charming personal style, and at the same time her zeal for arts and history, she became a legend. Let’s take a look at ten little known and very interesting facts about Jacqueline Kennedy Onassis, the style queen-

Following her graduation and prior to her marriage to John F.Kennedy, Jacqueline Kennedy was the ‘Inquiring Camera Girl’ for the Washington Times Herald. She took pictures of people she encountered, asked them questions on the issues of the day and wove their replies into her newspaper column. She also covered the 1953 coronation of Queen Elizabeth II.

At an early age, she wrote essays and poems which were sometimes published in local newspapers. She created a cartoon series in her high school newspaper ‘Salmagundi’ that earned her the graduating award for literature. She won “Prix de Paris” in 1951 as she submitted an entry to Vogue Magazine’s contest. She eloquently shared ‘People I Wish I Had Known’ in that magazine where she listed playwright Oscar Wilde,poet Charles Baudelaire and impresario Serge Diaghilev.

Her famous ensemble of pink channel suit was a production of New York Fashion salon Chez Ninon .It was first created by Coco Chanel. When she became the First Lady, her father-in-law, Joseph Kennedy, with the purpose to appear patriotic by wearing only American made clothing, discouraged her from buying clothing from Parisian fashion houses. The pink suit was one of Kennedy’s personal favorites. The suit became symbolic of Kennedy’s assassination as following his death, she refused to take off the suit, despite being stained by blood in the motorcade, she insisted upon wearing the suit. She told Lady Bird Johnson, “Oh no….I want them to see what they have done to Jack”.

Jacqueline Kennedy suffered a miscarriage in 1955, and in August 1956 she gave birth to a stillborn daughter whom she had planned to give the name Arabella. In 1963, she also gave birth to a baby boy, Patrick, who died from Hyaline membrane disease after two days of his birth. After President Kennedy’s death, she had exhumed their bodies and moved beside their father’s grave at Arlington National Cemetery. The two children who survived to adulthood were Caroline and John F.Kennedy Jr.

Jacqueline Kennedy, with Charles Collingwood of CBS news, took American television viewers to a televised tour of the newly restored White House. As First Lady, her major project was to restore the White House. She gathered amazing examples of American art and furniture from around the United States and restored all the public rooms in the White House. On February 14, 1962, eighty million Americans watched the broadcast of the televised tour, and it earned her an honorary Emmy Award. 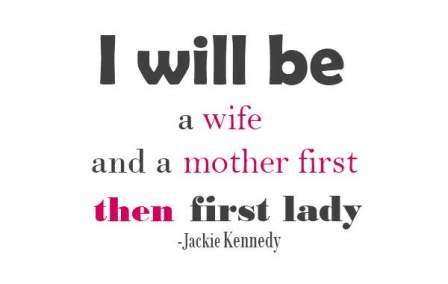 She appeared in Hustler Magazine accidentally. In 1972, she was photographed while sunning herself in the nude on husband Aristotle Onassis’ private Greek Island Skorpios, by a photographer using a telescopic lens on a fishing boat. Larry Flynt purchased them for his Hustler magazine. In the August issue, Flynt ran five full-color shots, and the issue quickly sold out despite Flynt’s decision to print several million more copies.

After the assassination of John F.Kennedy, and then her brother-in-law Robert F.Kennedy, she came to fear for her life and that of her children. She then married Aristotle Onassis, a wealthy Greek shipping magnate net who was able to provide her family with the security. During Jacqueline Kennedy’s marriage with Onassis, the couple inhabited six different residences. Her 15-room fifth Ave apartment in New York City, her horse farm in New Jersey, his Avenue Foch apartment in Paris, his private island in Greece named Skorpios, his house in Athens, and his 325 ft yatch, The Christina.

She was an avid world traveler. With her husband John F.Kennedy, she made trip to Paris, Vienna and Greece. As First Lady, she also traveled to Italy, India and Pakistan. She had great interest in other cultures and she was able to speak several foreign languages, including French, Spanish and Italian.

Another interesting fact about Jacqueline Kennedy Onassis is that in her later years, she worked as a Book Editor for Viking Press and Doubleday. She often wrote the introduction to the books. She edited and also worked on laying out the illustrations. She edited Larry Gonick’s The Cartoon History of the Universe.

For over forty years, she had a three-pack-a day habit of smoking. She also made sure that people didn’t refer to her habit in print. William Manchester’s The Death of a President had a reference to Jacqueline Kennedy at Parkside Hospital fishing a cigarette out of her purse. She stopped smoking at the insistence of her daughter Caroline, after having been diagnosed with cancer in early 1994 and sadly, that led to her death in May,1994 at the age of 64.