Siddhartha Gautama came to be known as Buddha the enlightened one or the awakened. He lived in Nepal during 6th to 4th century B.C. There are certain debates related to some of the facts of his living but they all agreed that he lived. Buddhism got its name from its leader – Buddha. There are some very interesting facts about Buddha that you should know.

The three teachings Buddha was not to be ignorant, hate and angry.

One day out of curiosity he asked a charioteer to take him on a ride through the countryside. There he saw an aged man, then a sick man, a corpse and a wandering ascetic. For the first time in life he realized and felt that what actually the reality was. He was moved by all that he saw and realized the actual reality of the life was outside his palace and not within it.

He returned to the Palace but he couldn’t enjoy the pleasure of the palace and wandered around in the Palace alone in the night. He realized that all good things, all that is beautiful will eventually perish. Even the news of the birth of his son couldn’t make him happy. So he gave up all the princely things and changed into the clothes of a beggar and went out of the palace in quest of enlightenment.

When he left the palace he started looking for teachers who could preach him about different religion and how to meditate. He tried many things but he was not able to attain the answers that he was looking for. He found out the middle way to gain enlightenment. 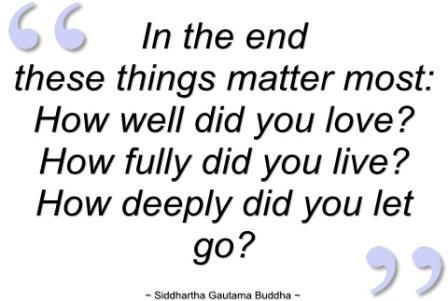 Siddhartha sat under a sacred fig and started meditating. It is believed that he was challenged by Mara a demon whose name means destruction and with the help of earth as witness he won the challenge and then Mara disappeared. At the end of the meditation he achieved all answers to his question and became a Buddha.

First he was reluctant about teaching as he believed that what he knows or realized is very difficult to explain in words. Only through pure mind and discipline one could attain the great reality. But compassion persuaded him to make the attempt and he started teaching the doctrines about enlightenment.

Once he started teaching, there were hundreds of followers.

Eventually he reconciled with his father, King Suddhodana. His wife, the devoted Yashodhara, became a nun and disciple. Another interesting fact about Buddha is that his son Rahula became the youngest monk at the very age of 7 and started living with his father.

He traveled tirelessly till the age of 80 when he died. His last words to his followers were to work towards their own deliverance as nothing in this world is permanent.