It is a rare case in all over the world that President’s son becomes a President himself but with George W. Bush that was a fact. His father George H. Bush was the 41st President of the United States. George W. Bush was born on July 6, 1946 to Barbara Pierce Bush in New Haven, Connecticut. He was often criticized for the decisions he made in crisis situation still he was doing something right else he wouldn’t have continued as the President for 8 long years. Let’s checkout some little known, amazing & interesting facts about George W. Bush-

He was an MBA making him the first President to hold this degree. He went to Harvard Business School and before that had attended Yale University. He became the President of Delta Kappa Epsilon and also the member of Skull and Bones Society. He was quite popular amongst students and he was a great athlete too.

He was the first President to participate in a Marathon and not only that he even completed the Houston Marathon in 3 hours 44 minutes. He was 47 years old when he participated in the marathon.

When he was elected as the President and he came into the White House the W key was missing from the keyboards. When the spokesperson was asked to comment on that he said wittingly that basically it should be WOW but as of now it is O.

He met Laura Bush at the barbeque at a common friend’s place in 1977 and in that year itself George W. Bush married Laura Welch and by 1981 they had been blessed with twin daughters whom they named Jenna and Barbara. 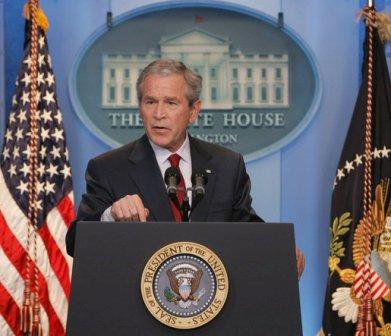 As a teenager he was addicted to alcohol and also had booked once for drinking and driving. It is said that he gave up alcohol in 1986 and his wife has a big role in making him do so.

He was always surrounded by pets. He had Scottish Terriers, one of them is named Barney and the other one is called Miss Beazley. One pet cat was also there whose name was India Willie and English Springer Spaniel called the Spot.

#8: Handkerchief as a savior

Another little known & very interesting fact about George W. Bush is that In 2005 he was nearly assassinated by Vladimir Arutyunian who threw a hand grenade in red handkerchief. It is said that grenade did not blast off as it was wrapped in the handkerchief so it saved the day for the President.

It was during his tenure as President that the infamous 9/11 attacks happened on the Pentagon and the World Trade Center. Hurricane Katrina was the next big thing that unsettled everything and the Afghanistan and Iraq war also happened during his tenure.