His original name was Samuel Langhorne Clemens and after trying with many pseudonyms like Josh, Rambler, etc. he stick to Mark Twain which is a phrase use by the crews of steamboat of Mississippi River when they were measuring the depth of the water. He had studied only till fifth grade and after that he had no formal training but he had some memorable novels, short stories and non-fiction books to his name. Here are some little known & interesting facts about Mark Twain –

He was said to be born pre-maturely on 30th November, 1835 and everybody including his mother thought there is no hope that he would survive.

Another interesting fact about Mark Twain is that he had great interest in parapsychology too and that is the reason he was able to predict his brother’s death. Not only his brother’s but he guessed the time of his own death too. According to him just as he was born just after the Halley’s Comet crossed the Earth’s sky, even his death will be marked by Halley’s Comet and that really happened as he passed away the night after Halley’s Comet was seen on Earth’s sky after 75 years.

Not many knew that he had a great understanding of the baseball game. He used to love this form of game early in his life but this became a known fact only much later in his life.

He suffered from depressions and also from constipation. Nothing could be done about depression as it was more of psychological thing but his first encounter with Tesla cured his constipation. The two became friends for life after that. 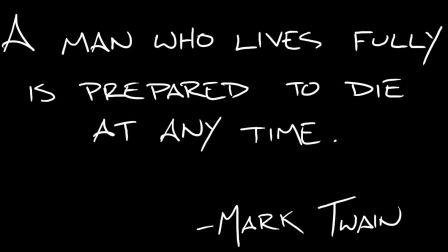 #6: Not ready to play second fiddle

He was once lecturing in the Dublin Lake Club and saw a woman knitting a sock and that made him so angry that he left his lecture in the middle and dashed off saying that he doesn’t want to play second fiddle to some sock. But he was again invited the following year and he shared his thoughts for more than 2 hours at the end of which he got a standing ovation.

He was never into exercising in fact he even used to write in his bed and if any reporter wanted to interview him then they were directed to his bedroom. He took pride in his act and said that all his life he has been eating and resting and he intends to carry on with that only.

He bought a typewriter of his own at $125 which would only type in capital letters and he also possessed personal telephone too.

He wrote “The Celebrated Jumping Frog of Calavaras County” in 1865 which gave him huge success and also gave him a permanent job with Sacramento Union.

Another interesting fact about Mark Twain is that he traveled the whole world almost with accrued debt as a hired lecturer. There were more than 100 engagements which he later published in Following the Equator.