Amongst the various subject books one buys in the beginning of each year, the one titled mathematics is always the one that though is highly fascinating initially, is the first to lose its charm. The numbers that give you butterflies in the beginning are the main reason for the stress you get during examinations. And bad health followed by streams of tears, one night before the examination can be called a ritual now. So, here are a few interesting facts about Maths that shall leave you in awe and be a reason for the silly smile on your face when you practice your next mathematics sum.

Sections 197 to 206 of the Criminal Code of Canada, when mingled provide a ban on “for-profit gaming or betting”, with exceptions like licensed casinos, provincial lotteries and charity events. However, organizations take advantage of the fact that the law allows prizes to be given for games requiring skills, or games needing both skill and chance. In order to make such contests official, these games usually consist of a mathematical STQ (Skill Testing Equation). Because of this law, the lottery winners can’t be chosen by luck. If you happen to win the lottery, you will have to answer a skill question, which is usually a four-part mathematical test such as “314+1÷ 5-9”

Mathematician William Shanks calculated the value of Pi (π) to 707 places but made a mistake on the 528th digit and thereby calculating every digit after it incorrectly. Pi (π) is not capable of being expressed as a fraction, thus, making it an irrational number. It neither repeats and nor does it end when written as a decimal.

Now the low grades in the mathematics paper can be explained to the furious parents by the knowledge of a simple disease and good acting skills. The word dyscalculia means difficulty in understanding numbers, and learning mathematics facts. Convincing, isn’t it?

Here is a good explanation as to why one gets panic attacks on seeing the mathematics exam paper. The word mathematics is an anagram of ‘me asthmatic’.

There are just four numbers (after 1) which are the sums of the cubes of their digits: 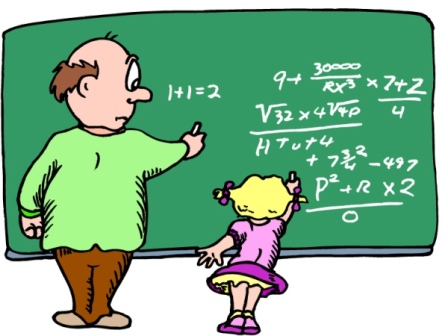 In 1997, a divide by zero error occurred when a crew member entered “a” in the database on board of the USS Yorktown, a billion dollar navy smart boat, brought down all the machines on the network causing the ship’s thrust system to fail.

One of the most interesting facts about Maths is that it has many unsolved questions till now. The clay mathematics institute offers $ 1000000 to anyone who can solve any of these 7 unsolved problems in mathematics:

ZERO is the only number which has so many names such as nought, naught, nil, zilch and zip.

Mathematics is one of the only areas of knowledge that can objectively be described as “true,” because its theorems are derived from only logic. And yet, at the same time, those theorems are often extremely strange and counter-intuitive.