Every time I hear the name of Muhammad Ali, I would always connect him to the world of boxing where he had aimed his fame and popularity. But as person, Muhammad Ali is not just all about boxing and his legacy that he has left to all of his fans and to the whole world. There are definitely a lot of things that we do not know about this great guy. He is more than just a boxer. He is more than just an icon, but he is a person with a great heart. Let me tell you some very interesting facts about Muhammad Ali that you may not know about him yet.

Cassius Clay or better known as Muhammad Ali has also been a fan of Sugar Ray Robinson. There was a time that Muhammad wants to get an autograph signature of Sugar Ray Robinson, but he was turned down. With this incident, when Muhammad was there in the spot light, he had never let a fan be turned down because of the reason that he does not have time to time. He really takes good care of his fans and treats them well because as what he had experienced, he does not want his fans to feel his rejection.

Muhammad has also passed the age as a student, but unlike other students who ride a bus to school, believe me, Muhammad does not do this thing. Instead of riding, he would literally race the bus to the school every morning that he had a class. Great! Isn’t it?

Another legend who goes by the name of Elvis Presley gave Muhammad Ali a robe with a name at the back “The People’s Champion. After that, Ali wore it to his next fight, but unfortunately, he lost. Right after that match, he never wore the robe again as he denotes it as a bad luck.

It was because of a stolen bike that paved way for Muhammad’s boxing career. During his childhood, his bicycle was stolen, and then in the police station, he met Officer Joe Martin. He was the one who had introduced Muhammad to boxing.

Did you know that Muhammad is also a singer? It was in 1963 where he sang the song “Stand By Me.” It was in 1964 when the record was released in his very own album entitled “I am the Greatest.” 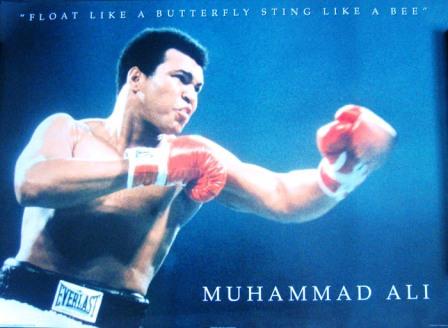 He also rode on a float in what we call Tournament of Roses parade which commemorated the 200th US Constitution anniversary.

It was in 1960 where Muhammad has won a gold medal as a light heavyweight in the Olympics. Later after returning to the US, he was refused at a service at a small diner. Right there and then, he threw his gold medal in the Ohio River for he said that he does not want to wear a gold medal in a country where he could not be served. The reason why he was refused was because of his race.

Aside from being a boxer and a singer, Ali also starred himself in a four motion pictures in December 1969 which he took the lead in a Broadway called Buck White.

#9: Inspiration for a Movie

Rocky’s opponent in the film entitled Apollo Creed was based on Ali. This was a film written and acted out by Sylvester Stallone himself.

Another interesting fact about Out of 110 amateur fights that he had done, he had a knocked out only once. Truly that there are a lot of things that we do not know about Ali yet and yes, he is a great man!