The Nobel Prize and The Pulitzer prize winner, who began his career at the age of seventeen as a writer in the newspaper office in the Kansas city, followed by becoming a volunteer in the ambulance unit in the Italian army and then a reporter for the American and Canadian newspapers, which sent him to cover events such as the Greek revolution. The man I speak of is Ernest Hemingway. His works of literature are filled with stories of soldiers and bull fighters who were brave enough to stand boldly against the cruel ways of the society. He had five siblings and grew up in Illinois. I bet you didn’t know that. Well here are a few more interesting facts about Ernest Hemingway that you might not be aware of-

Ernest Hemingway is known to have been born in Oak Park, Illinois. It is a suburb of Chicago that has also been home to Edgar Rice Burroughs.

Hemingway is known to have met J.D. Salinger during World War II who was then fighting with the 12th Infantry Regiment.

All of us dream of going to Paris but Hemingway wrote about his life in Paris and named it A Moveable Feast in the year 1920s which was sadly not published until 1964.

Hemingway’s son is known to have worked as a big-game hunter and ran a safari business in Tanzania. His name was Patrick.

Wars have a different way of affecting one’s life. In Hemingway’s case it affected him in his works. He is known to have written only one one play called The Fifth Column which is set during the Spanish Civil War. 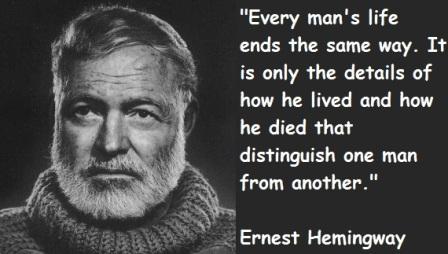 Not only could he win a battle with his pen but also with his physical power. Probably that was the reason that he was awarded a Bronze Star for his bravery under-fire in World War II while being a war correspondent.

Hemingway is known to have left trunks of material in the Paris Ritz in the year 1928 which he was unable to recover until the year 1957.

Being on even the slightest mind of an FBI agent is a nightmare for the many of us but Hemingway was not the ordinary kind of a man after all. The FBI maintained an open file on Hemingway from World War II onwards and this was least of his worries.

Another interesting fact about Ernest Hemingway’s life is that Committing suicide was something that had been going on like a wave in Hemingway’s family as his sister, brother and father, all committed suicide. I wonder what was so wrong with their world?

Men often tend to run away from woman but that was not the case with Ernest Hemingway. He lived with his fourth wife Mary and was buried in Ketchum’s town cemetery in Idaho with her.