The greatest sculpture Michelangelo was born in 6 march, 1475. In the early age he lost his mother and was growing up in the stone-cutter family in settignano town. With the keen interest of art he left the school and nourishes his wish to the creativity. He could prefer copying the painting of churches than study. His nose was crooked when he was in 17.

Michelangelo was attended in the Lorenzo’s school but not more than two years. He was influenced from the eminent artists and these years discovered some great work of art. Before he turned thirty he made of his great and famous sculptures.

Pieta and David are two best known works. The David was 5′ 4″ but it was carved from a 19′ block of marble.  He only signed in the Pieta. The Last judgment was the alter work the Sistine chapel. He is the pioneer of Mannerist style architectural work. Interesting thing is that Fresco was created by the force.

Michelangelo was devoted to work. He tries to originating the feeling from the inner inspiration. He worked on sculptures before the last minute of death. Michelangelo spend his life with discovered many creations.  Selecting marble he spends a month for his excellent creation. If he didn’t do that we will not able to see this great creation.

He was the Renaissance man also he was called II Divino that means, ‘the divine one’.  The artists who admired his epoch were highly influenced by his greatest work. 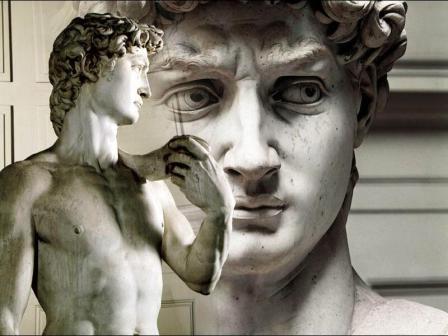 Michelangelo was famous and well known as a poet. About 300 of his poems touch the heart of readers. He wrote over many sonnets and madrigals. The longest sequence was written to TommoasodeiCavalieri.

Historical records tell that Michelangelo toke beak his work since 1527 to 1529 for defending the Republic of Florence.

He was often dissatisfied with his creation and with himself. At the end of the life Michelangelo destroyed a lot of his sketches. He hated bathing and appeared on his deathbed.

#9: Respected in a life time

In the history there are few people that had a biography in his life time.  The interesting fact about Michelangelo’s life is that he was the first western artists whose biography were published in the when he is alive. Many artists don’t get the respect in their life time.

Michelangelo was died on 18 February in 1564 and in the death time his age was 88 and we lost a great artist.