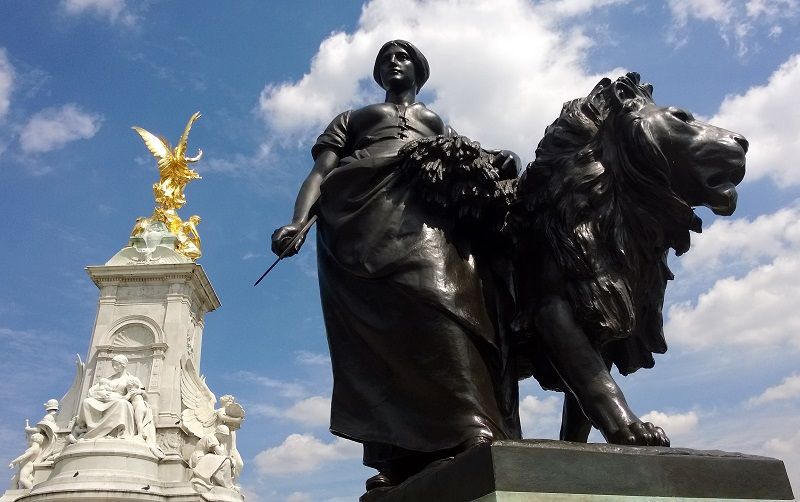 Who can deny the beauty of the world’s greatest city ‘London’!  London offers a plethora of places to visit and see how mesmerizing can a city be. The Victoria Memorial is one of such places, which was built in the honour of Queen Victoria. Queen Victoria ruled the UK for about 64 years and this memorial was designed right after her death in 1901. It was divulged a decade after in 1911. It was the artistic scheme of Aston Webb whereas the statues were entirely the work of sculptor named Thomas Brock.

This huge memorial is situated in front of the Buckingham Palace at the end of the Mall to the South side of Green Park. This area is closed to traffic on Sundays, public holidays and on ceremonial occasions.

Victoria Memorial comprises of The Dominion Gates that includes Canadian Gate, Australia Gate, South and West Africa Gates. Now Let me enlighten you with their significance which is even more interesting. These gates were presented by respective countries to the UK as a tribute to Queen Victoria.

The official unveiling of this memorial was done by King George V in 1911. The ceremony took place on 16 may and His first cousin, Wilhelm II of Germany was also present. As Wilhelm II Germany and King George V were the two grandsons of Victoria. There was also a large number of Member of Parliament and various armed forces in attendance.

The monument is 25 Meters in height which is one of the tallest ones. It is made up of white Carrara marble. It comprises of 2300 tons of this marble.

The Main monument comprises different statues which are having their own significance but this winged victory in lustrous shine draws everyone’s attention. Even though it was built as a tribute to Queen Victoria but there is much more to see. At the top, there is winged victory which very beautiful and at her feet, there are courage and constancy which are all painted gold. Both the angels are well represented by the Victory at the top.

Then coming down from gilt victory we can see the figures made up of Carrara white marble which has a statue of Queen Victoria with 18 feet in height which is facing away from Buckingham Palace. To her left, there is an angel of Justice and angel of truth on her right. Truth is having a mirror and a snake under her foot; however, justice is wearing a helmet and carrying a sword too. Then just in front of the Palace, there is a figure of motherhood with three infants which is sometimes also called charity.

To just add some more beauty to this priceless monument there are a number of sea animals depicted on the just on the base. This empire includes mermen mermaids and other sea creatures.

There are four big lions each with different figures depicting different meanings. On the very east side of the enclosing wall, there is a peace which recalls the peak of victory with her light garments and with a small twig of olive leaf. Then there is progress which more of like a Greek athlete who is striking forward with a torch skywards. On the western side, there is agriculture and manufacturer. A manufacturer is a workman with muscles and beard wearing an apron whereas agriculture is a woman who is costumed as a milkmaid carrying a curved blade and a bundle of grains as well. All in all, these four are just beyond excellent.

Where there are statues that surrounds the enclosing walls, just below that we can find two sets of wonderfully made lion sculptures. One of them is a gift from New Zealand for the Queen’s honour.

The gardens of memorials are well maintained and organized. Basically, flowerbeds are all around the monument in semi-circular patterns. Schedule of the plantation is repeated every year. Plants are considered according to the tunics of the palace in order to contrast well. In summers one can see weeping figs, spider plants whereas in winters the garden is filled with yellow wallflowers and red tulips which are almost 50,000 in the count. Just Amazing!