Sir Isaac Newton, the greatest scientist was responsible for path – breaking inventions that challenged the human race of their popular beliefs. Though we all know about scientist Isaac Newton and his findings but we don’t have much knowledge about the person Sir Isaac Newton. He is believed to be an alchemist, a strong believer of God and also calculated the day will come to an end. There are some other interesting facts about Isaac Newton like these, about the great scientist which most of us are not aware of

#1: Controversy over his birth date

When he was born England had not adopted to the Gregorian calendar so it was stated that he was born on the Christmas day in the same year that Galileo died i.e. the year 1642, but in 1752 when the new calendar came into existence then January 4, 1643 was recognized his birthday.

He was born so small that it is believed that he would have fit into quart- sized cup. His father died three months prior to his birth and when he was 3 years old his mother re-married and Newton was sent off to stay with his maternal grandmother. He used to stutter and also was not a very good student during his earlier days but when a big bully had beaten him up he thought of teaching him a lesson. So he first challenged the bully over a fight which he won but still not satisfied he thought of giving it back to him in academics also and this is the time he started studying hard and focused on academics which made a strong foundation for future academics success.

As a Warden of Mint he cross examined 100 of witness, informers and suspects and prosecuted 28 of them during the period of June 1698 till Christmas 1699.

According to Newton his pet dog named Diamond set his laboratory on fire destroying 20 years of his research.

He calculated the end of the world as not before than 2060. He also made experiments with lead and mercury to produce Philosopher’s stone which would be an elixir of life. As a politician he served for one year and in the Parliament he spoke one and only one sentence throughout his tenure and that too was meant for his nearby usher asking him to close the window. 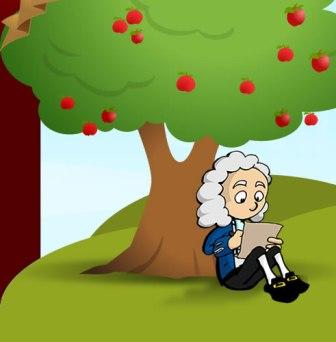 It is the popular belief that the apple fell on his head while he was sitting under an apple tree but as per Newton he actually saw the fruit falling when he was staring out of the window.

Another interesting fact about Isaac Newton which is unknown to most of the people is that he has worked more on The Bible and religion rather than science or mathematics. Though he believed in God but he didn’t believe in Satan or Holy Trinity.

He used to work a lot with lead and mercury and as we all know too much of mercury can drive anybody mad so during his last days he used behave in an eccentric way.