“Saturday Night”, “Grease”, “Pulp Fiction”, these are some of most popular movies and the one common thing in all of them is John Travolta. John Travolta is clearly one of the biggest names of Hollywood. Having made a rather humble debut in the series Welcome back on television, Travolta moved onto Hollywood where he realized his lifelong dream of becoming an actor. John Travolta, who hails from New York, is a multi talented human being. He is obviously and actor but in addition to that he also happens to be a dancer and even a singer. In his career he has seen some exceptionally high points, some low points and some absolute dry spells, as it were. However there are some interesting facts about John Travolta that might amuse his fans.

In the year of 1997 a poll was conducted by the famous UK magazine called Empire. The poll was done to make a list of the “greatest movies stars of all time”. In the results of the list it was found that the fans voted and thus ranked Travolta at the 21st position.

“Saturday Night Fever” was a landmark movie in the career of John Travolta as it clearly put him on the map, so to speak. However a lesser known fact remains that Travolta went through a lot of hard work for the all-important dance scenes of this movie. He had to undergo a training of 9 long months

There is not a single member of the film fraternity who would deny his or her craving for the golden globe award. John Travolta got this auspicious award for the movie “Get Shorty”. The award was presented to him to applaud his excellent performance in this movie. Thus he was given the “Golden Globe Award” for the best actor.

Some might construe the act as nothing but a sign of bad luck when Travolta refused to work in the movies like “American Gigolo”, “Chicago” and “An Officer and a Gentleman”. It is well known that these movies later on proved to be great hits but the roles that were offered to John Travolta were played by Richard Gere, one of his many contemporaries.

John Travolta, the proud owner of five aircrafts, also happens to be a trained pilot and thus is certified to fly private planes. 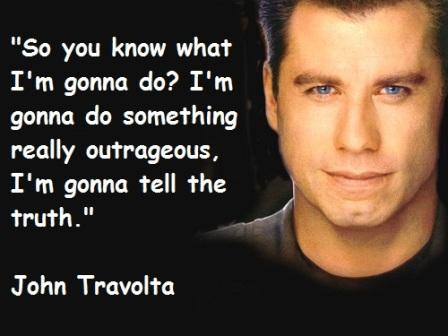 The movies like “Grease” and “Saturday Night Fever” did the job of a catapult as after series of flops and what was thought of as a wasted career, these movies clearly established his potentials as an actor and consolidated his position in the movies industry.

It is known to anybody and everybody who has not been living under a rock that the movie “Splash” was a great success. However the fact that John Travolta was offered the role of Tom Hanks in this movie might be a lesser known fact.

The popular Oprah Winfrey is one of the biggest fans of John Travolta and also a dear friend.

It is well known that John Travolta does like to work out and be in good shape. However he had to make an exception to this rule of working out for the movie “Primary Colors” when for the character to be more realistic and in agreement with the script he had to put on 40 pounds. He made this exception of his own volition thereby clearly showing his devotion to his work.

Apart from being an actor, a dancer, a singer John Travolta also happens to be an author and a writer. His books have been published and loved by all. The interesting fact about John Travolta’s writing is that one of his most popular books is “Propeller One-Way Night Coach” is about Travolta’s son who died of seizure.