The Spanish language originated in the Southwest region of Europe known as the Iberian Peninsula. Beginning in the 1400s, Spanish explorers, conquistadors, and colonizers took their language to Central America, parts of North America and South America.

Spanish language knowledge and cultural diversity within the Americas has become vital for international and domestic business, healthcare, social services, international relations, politics, government, education, travel, and many other fields. There are some very interesting facts about Spanish language that you should know.

Español, Castellano, Castilian are the alternate names of Spanish language

Spanish has an extensive history in the United States (many southern states were part of Mexico and Spain) and it recently has been revived by much immigration from Latin America. Spanish is the most commonly taught foreign language in U.S. Though the country has no formally chosen “official languages”, Spanish is officially recognized at the state level, besides English; in the U.S. state of New Mexico 30 per cent of the population speak it. Spanish is the leading spoken language in Puerto Rico. Also, the U.S. has the world’s fifth major Spanish-speaking population.

Spanish is viewed as an asset for U.S. Indigenous peoples in the Southwest as it can promote indigenism and expand the base of cultural and political exchange.

The Spanish spoken in the Americas differs somewhat from European Spanish today because many words were borrowed from the languages of the indigenous peoples. Most of these words reflect characteristics distinctive to the new territories, such as plants and animals, proper names and geographic description. 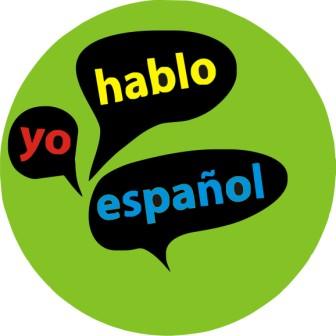 Pronouncing Spanish based on the written word is much simpler than pronouncing English based on written English. This is because, with only some exceptions, every letter in the Spanish alphabet represents a single sound, and even when there are various possible sounds, simple rules tell us which the correct one is. In contrast, many letters and letter combinations in English represent multiple sounds (such as the ou and gh in words like cough, through, though, rough etc.).

The Spanish vowel system is much smaller than that of English; they are similar to the short vowels of English. Spanish vowels consists of: a, e, i, o, u

Just as in the English-speaking world, people in various Spanish-speaking countries and areas speak with different accents. The major difference is that in the Americas two sounds were lost in comparison to Spain: ll sounds like y and z sounds like s.

Dialectal variations in Spanish phonology exist. It is vital to recognize this when assessing a Spanish speaker. For example, /v/ and /θ/ occur in some Spanish dialects.

According to Goldstein (1996), Spanish is considered pro-drop language, where the subject of the sentence may be absent. For example the following sentences are both grammatically correct, even if the subject ― yo‖ is not included: (1) yo tengo un gato (―I have a cat‖; (2) tengo un gato.

These interesting facts about Spanish language are good to boost your knowledge as Spanish is considered by linguistics to be one of the world’s romantic languages. Also counted among the romantic languages are: French, Romanian, Italian and Portuguese.